I love tattoos. I don't have a single one and I would not get one. There are several reasons why I would't get one. First is that I never could decide what I would want to have for the rest of my life. I think if I like to rearrange my furniture I would decide that I don't like my tattoo anymore and it would be permanent. I also would never get one out of respect for my mother. She would flip if I got one.
But I really like certain tattoos and people who are covered up in them don't scare me. I like their company. Some of the nicest people I know are covered in tattoos. If you turned my skin inside out I am covered in tattoos too. I think they are cool. Something that bothers me lately is that I think we are judgemental towards those who have a lot of tattoos. This trendy look of 2000 will be what the generation of war veterans who are now in their 70's-90's who have the pin up girl on their forearm or the Marine Coat of Arms on their bicep. It's normal to see an elderly man with their military tattoo. So many have them. The same will be true of the tattoo styles of today. It will be normal to see a heavily tattooed elderly person because many folks will be in that catagory in 30-50 years.
Tattooing is also keeping our artists employed and making money. Artists have difficulty finding steady work and income. Their canvas is skin. Some tattoo artists may have been starving artists if not for the trend of tattoos. 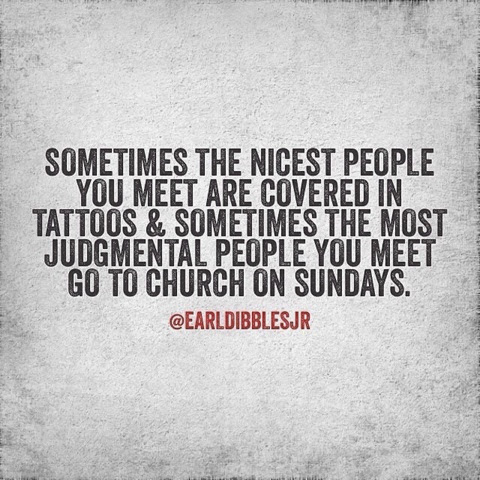 I am suggesting that we refrain from passing judgement on people who have tattoos nowadays. Most of them are the nicest people out there. And some of the most judgemental people fill our church pews on Sunday. If Jesus came back today I am convinced he would not darken the door of the church building. He would be in the tattoo parlors and on the streets mingling with the people, the lost. Not suggesting tattooed people are lost, just saying that I think Jesus would be out among the people instead of filling the church pews. Maybe we should be more like Jesus and mingle among the people in addition to worshipping with the congregation.
May we all be less judgemental today.  Thank you for reading my blog. Please subscribe in the box to the right to receive updates when I write a new blog.
Jennifer
Posted by Jennifer Anglin at 9:31 PM

Promote Your Page Too